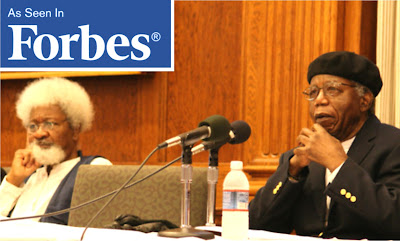 
The following news should not surprise those who are close to Kongi.

Nobel Laureate, Prof. Wole Soyinka, has backed his literary colleague, Prof. Chinua Achebe, in the raging controversy over the roles of some prominent Nigerians during the Nigerian civil war. 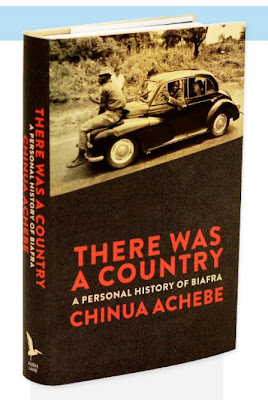 Soyinka, in an interview published in The Telegraph of London, but obtained by THISDAY yesterday, said the Igbo were victims of genocide during the three-year civil war, which was fought to break up Nigeria.

Achebe had stirred the hornet's nest in his civil war memoir, "There Was A Country", when among others, he accused wartime Head of State, Gen. Yakubu Gowon and the then Finance Minister, Chief Obafemi Awolowo, of carrying out a genocide against the Igbo.

The claim has generated considerable controversy, with many commentators accusing Achebe of re-writing history.

QUEBEC CITY, Oct. 17, 2012 / CNW Telbec / - The executive director of the Museum of Civilization, Michel Côté, invites you to visit the great press exposure ARTS OF NIGERIA IN FRENCH PRIVATE COLLECTIONS, Tuesday, Oct. 23 at 11 am, at the Museum of civilization, 85 rue Dalhousie, Quebec. This visit will release in the presence of curator and collector, Alain Lebas.

Diversity and certain aesthetic qualities, that which describes the magnificent works of the exhibition Arts of Nigeria in the French private collections.

With more than 140 million people and 250 ethnic groups spread over the whole country, Nigeria is an African country with a great diversity of languages, customs and traditions. It is through more than 187 artifacts from 26 French private collections and carried out by members of 44 ethnic groups in Nigeria the Museum of Civilization offers visitors a journey into the African society to discover an important facet of their culture and history. Many of these pieces have never been shown to the public either in Europe or in America. Eponymous catalog, beautifully illustrated, accompanies the exhibition.