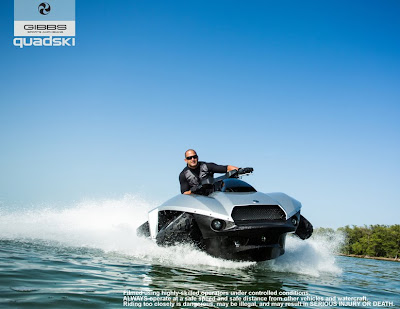 From land to water with the press of a button, the retracting wheels means no drag in the water – allowing Quadski to hit high speeds, while lightweight materials enable planing.

DETROIT, October 15, 2012 /PRNewswire/ — The world’s first high-speed sports amphibian – the GIBBS Quadski — will go on sale in the United States next month.

The dream of two visionary entrepreneurs, the GIBBS high-speed amphibian is the product of millions of research dollars and years of development work in the United States, New Zealand and the UK. It will be produced at a 54,000-square-foot assembly plant in Auburn Hills, Michigan.

An entirely new form of transportation for U.S. consumers, the Quadski is capable of reaching speeds of 45 mph on both land and water and transitions between both in five seconds or less.

Introduced at a Gibbs Sports Amphibian press conference in Detroit by Alan Gibbs, the company’s founder, and Neil Jenkins, its chairman, the Quadski is equipped with a 175-horsepower BMW Motorrad engine and transmission. With the press of a button, its wheels retract when entering the water and deploy when approaching land.

Jenkins told reporters in Detroit that Quadski will retail for about $40,000 when introduced in November. The company expects to have more than 20 dealership locations in place within the next 12 months, primarily in the Midwest, New York, Texas and the southeastern United States.

The GIBBS amphibian weighs 1,300 pounds, is equipped with a 15-gallon fuel tank and will be available in five colors – red, yellow, blue, silver and black. Suggested retail pricing and details about GIBBS’ dealer network will be announced prior to public introduction in mid November.

“Quadski represents an investment of more than $200-million and two-million man hours of work over a period of 15 years,” said Alan Gibbs. “With the introduction of Quadski next month, our dream of providing high-speed amphibian transportation to consumers will become a reality.

GIBBS has more than 300 patents and patents pending on its High Speed Amphibian (HSA) technology for consumer, commercial and first-responder use.

“It’s been a long, uphill battle, but clearly worth the effort,” said Gibbs. “Quadski will pave the way for a host of other HSAs for consumers, sports enthusiasts, law enforcement agencies, first responders and other commercial enterprises.”

Jenkins noted that Gibbs Sports Amphibians expects to add a total of more than 200 jobs at its Auburn Hills facilities on Brown Road and its new assembly plant at 50 Corporate Drive in the next 12 months. At maximum capacity, the plant will be capable of producing 20 units per hour. The company currently has 100 Michigan employees.

“Although Quadski initially will be available for sale only in the U.S., we expect to find a ready market for it in Europe, Latin America and elsewhere around the world in 2014 and beyond,” Gibbs added.

“We’ve created an entirely new powersports category with our patented HSA technology. Quadski is especially designed for families and individuals who enjoy the outdoors, watersports, off-road travel, hunting and fishing,” said Jenkins. “It offers premium powersports buyers a combination of power, safety, comfort and versatility that has never been available before.”

Designed to meet applicable state and federal safety requirements, the Quadski is 10.5 feet in overall length; 5.2 feet in width, and 4.3 feet in height with a wheelbase of 5.8 feet. It initially will be offered for use by one person.

About Alan Gibbs and Neil Jenkins

Alan Gibbs is the founder of Gibbs Technologies and Gibbs Sports Amphibians, Inc. A well-known business leader, entrepreneur and diplomat, he served in New Zealand’s diplomatic corps; led the successful privatization and restructuring of New Zealand Telecom; owned and operated a merchant bank, and helped launch New Zealand’s only pay-television service (Sky). He maintains homes in New Zealand, the UK and the U.S. “The Farm,” his 1,000-acre estate in New Zealand, is home to one of the world’s largest collections of outdoor sculpture.

Neil Jenkins, the chairman of Gibbs Technologies and Gibbs Sports Amphibians, Inc., holds England’s prestigious Churchill Award as well as the Sir Henry Royce Medal for his work in developing high-speed amphibian technology. The founder of Krafthaus, a developer of lightweight vehicle technology, he merged his company with Gibbs Technologies in 1999. His background includes work in the British aerospace and automotive sectors, including various fast-jet and satellite-communication projects. He has homes in the Detroit area and in the Midlands in the UK.

Gibbs Sports Amphibians, Inc. (GIBBS) has pioneered in the development of its High Speed Amphibian Technology to create the world’s first sports amphibian to operate at high speeds on both land and water. The privately held company, founded by Alan Gibbs with Neil Jenkins in 2012, consists of two divisions – Gibbs Sports Amphibians, Inc., which designs and manufactures consumer sports amphibians such as the Quadski, and Gibbs Amphitrucks Inc., which builds commercial amphibians for first responder and military applications. Based in Auburn Hills, Mich., GIBBS currently has more than 100 employees. More information about GIBBS and its HSA technology can be found at www.gibbssports.com.