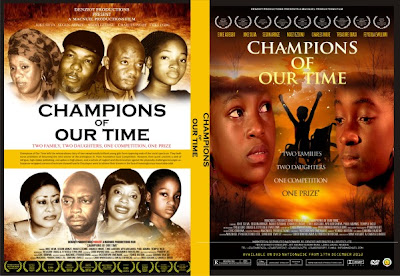 The multiple awards winning movie sponsored by the Lagos state government became the first and the only Nollywood movie to win the major ECOWAS Special Prize and the Prix spécial du jury pour une œuvre de fiction TV/Vidéo (Special Jury Prize for TV/Video fiction) with a value of one million CFA francs at the highly competitive Panafrican Film and Television Festival of Ouagadougou ( FESPACO) in 2011. Champions of Our Time with screenplay by the award winning screenwriter Chidi Nwokeabia and directed by award winning filmmaker Mak Kusare and Charles Inojie is the second Nigerian movie to have been so honoured since Newton Aduaka won the most coveted First Prize, Étalon de Yenenga for his Ezra in 2007.

Champions of Our Time tells the extraordinary story of two exceptionally brilliant young girls from opposing ends of the social spectrum. They both nurse ambitions of becoming the next winner of the prestigious St. Flairs Foundation Quiz Competition. However, their quest unravels a web of intrigue, high-stakes politicking, corruption in high places, and a culture of neglect and discrimination against the physically challenged amongst us. Suspense-wrapped scenes in the movie showed how far the players went to achieve their dreams in the face of seemingly insurmountable odds.