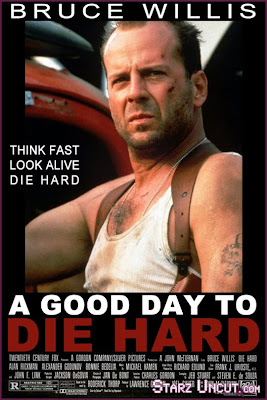 "The exhilarating action sequences that are the hallmark of the Die Hard franchise, as well as its global setting, make it a perfect fit for The IMAX Experience®," said Greg Foster, Chairman and President of IMAX Filmed Entertainment. "We're thrilled to partner again with the great team at Fox and for audiences worldwide to experience this franchise in IMAX for the first time."

The IMAX release of A Good Day to Die Hard will be digitally re-mastered into the image and sound quality of The IMAX Experience® with proprietary IMAX DMR® (Digital Re-mastering) technology. The crystal-clear images, coupled with IMAX's customized theatre geometry and powerful digital audio, create a unique environment that will make audiences feel as if they are in the movie.

About A Good Day to Die Hard
John McClane goes global. For the first time, the New York City cop, played by Bruce Willis, finds himself on an international stage – as a fish out of water in Moscow. The film introduces McClane's estranged son Jack, an apple who hasn't fallen far from the tree, and who may even be more of a hard-ass than his father. John and Jack must put aside their personal and professional differences, and work together to keep each other alive … and stop the Moscow underworld from controlling nuclear weapons.

About IMAX Corporation
IMAX, an innovator in entertainment technology, combines proprietary software, architecture and equipment to create experiences that take you beyond the edge of your seat to a world you've never imagined. Top filmmakers and studios are utilizing IMAX theatres to connect with audiences in extraordinary ways, and, as such, IMAX's network is among the most important and successful theatrical distribution platforms for major event films around the globe.

IMAX is headquartered in New York, Toronto and Los Angeles, with offices in London, Tokyo, Shanghai and Beijing. As of Sept. 30, 2012, there were 689 IMAX theatres (556 commercial multiplex, 20 commercial destination and 113 institutional) in 52 countries.

IMAX®, IMAX® 3D, IMAX DMR®, Experience It In IMAX®, An IMAX 3D Experience®, The IMAX Experience® and IMAX Is Believing® are trademarks of IMAX Corporation. More information about the Company can be found at www.imax.com. You may also connect with IMAX on Facebook (www.facebook.com/imax), Twitter (www.twitter.com/imax) and YouTube (www.youtube.com/imaxmovies).

This press release contains forward looking statements that are based on IMAX management's assumptions and existing information and involve certain risks and uncertainties which could cause actual results to differ materially from future results expressed or implied by such forward looking statements. These risks and uncertainties are discussed in IMAX's most recent Annual Report on Form 10-K and most recent Quarterly Reports on Form 10-Q.