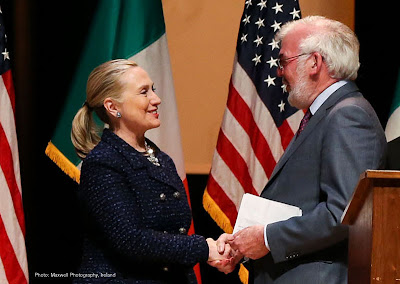 Secretary Clinton was in Dublin December 6 and 7 as part of her last official visit to Ireland to participate in the ministerial meeting of the Organization for Security and Cooperation in Europe (OSCE). The Secretary also met with Irish officials to discuss areas of cooperation in promoting peace, human rights, and economic growth, and delivered a major speech on U.S. achievements in support of human rights globally. After that speech at Dublin City University, Concern Worldwide CEO Tom Arnold presented the Secretary with the award.

"There is no one more deserving or fitting for the first Fr. Aengus Finucane Award than Secretary Clinton," said Mr. Arnold. "In her time as Secretary of State, she has put development at the heart of U.S. foreign policy and led the world in the fight against under-nutrition, especially during the critical 1,000-day window from pregnancy to a child's second birthday—an effort that will improve the lives of tens of millions of women and children."

In its first year, the Fr. Aengus Finucane Award for Services to Humanity recognizes outstanding humanitarian leadership in memory of the life and work of Fr. Aengus Finucane, who was part of Concern's very first mission in response to the famine in Biafra in 1968 and went on to serve as Chief Executive from 1981 to 1997. He then moved to the United States to found Concern Worldwide U.S., where he served as Honorary President until his passing in October 2009.

Before receiving the award, Secretary Clinton spoke about human rights and the continued struggle for gender equality. "We are on the right side of history in this struggle, but there will be many sacrifices and losses until we finally reach a point where daughters are valued as sons, where girls are as educated as boys, where women are encouraged and permitted to make their contributions to their families, to their societies just as the men are," she said.

"The whole purpose of Fr. Aengus' life was to improve the lives of others," said Mr. Arnold. "He passionately believed that we could never break the cycle of poverty and hunger if we did not invest in women and girls and fight to give them equal opportunities. This is exactly what Secretary Clinton stands for and therefore it is very appropriate that Secretary Clinton is the first recipient of this honor."

About Concern Worldwide
Concern Worldwide is an international, non-governmental humanitarian organization dedicated to reducing extreme poverty, with more than 3,200 personnel working in 25 of the world's poorest countries in Africa, Asia, and the Caribbean. Concern Worldwide targets the root causes of extreme poverty through programs in health, education, livelihoods and microfinance, HIV and AIDS, and emergency response, directly reaching more than 8.5 million people. For more information, please visit concernusa.org or follow us on Twitter and Facebook .