We Are the Generation That Will End Smoking 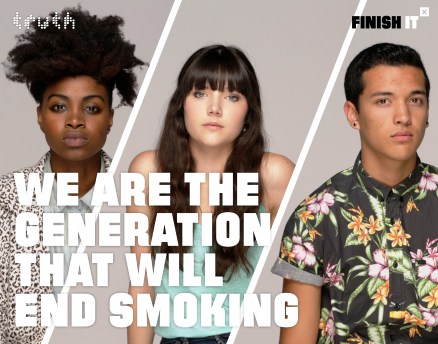 PR Newswire, Washington, DC, July 9, 2015
The award-winning truth campaign released a video highlighting a policy at the nation’s No. 2 tobacco company banning smoking in its office buildings. The video notes with irony that R.J. Reynolds, the maker of Camel cigarettes, is prohibiting cigarette smoking at workers’ desks.

“Smoking is a deadly and addictive habit and after years of denying the health harms even Big Tobacco wants smoking out of the workplace,” said Robin Koval, CEO and president of Legacy, which funds and directs the truth campaign. “Our Finish It campaign is building momentum to help make this the generation that ends smoking. Workplace bans on smoking have helped bring down the smoking rate in the U.S. among adults and teens, and we want the young people who have the power to influence each others to know that even Big Tobacco companies cannot ignore the deadly and addictive nature of the cigarettes they make and sell.”

Reynolds had long banned smoking in cafeterias and fitness centers. Their new policy which extends the ban to offices, conference rooms, hallways and elevators, took effect January 1 and extended the cigarette smoking ban throughout their offices – with the exception of designated and separate facilities for employees who want to smoke inside. Approximately 20 percent of the company’s 5,200 employees are smokers, according to an R.J. Reynolds spokesperson.

The teen smoking rate in the United States reached 8 percent last year, but tobacco use is still the nation’s leading cause of preventable death. Launched last year, truth’s Finish It campaign highlights progress toward making this the generation that ends tobacco use. In addition to the new Reynolds video, there are more “progress reports” available online.

truth® is the most successful and one of the largest national youth smoking prevention campaign. The campaign exposes the tactics of the tobacco industry, the truth about addiction, and the health effects and social consequences of smoking. truth gives teens facts and information about the tobacco industry and its products, allowing them to make their own informed choices about tobacco use. Research-proven as an effective public health intervention, the campaign is credited with keeping hundreds of thousands of teens from starting to smoke. To learn more, visit http://www.thetruth.com. truth is directed and funded by Legacy, a national public health foundation located in Washington, D.C. Legacy was created as a result of the November 1998 Master Settlement Agreement (MSA) reached between attorneys general from 46 states, five U.S. territories and the tobacco industry. To learn more about Legacy’s life-saving programs, visit www.LegacyForHealth.org.