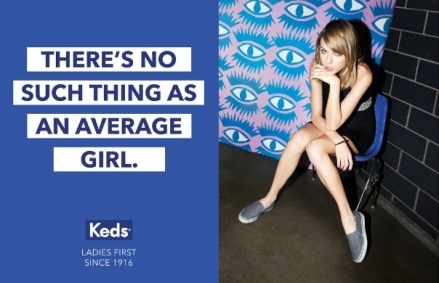 LEXINGTON, Mass., July 23, 2015 /PRNewswire/ -- Keds® announces the launch of Ladies First Since 1916, a new global brand platform with a fresh perspective on what it means to be a woman today. The platform is inspired by women who create their own paths, make their own rules, and harness the power of femininity and strength. 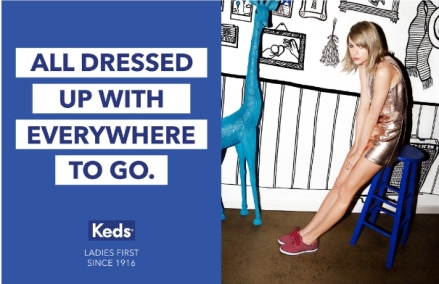 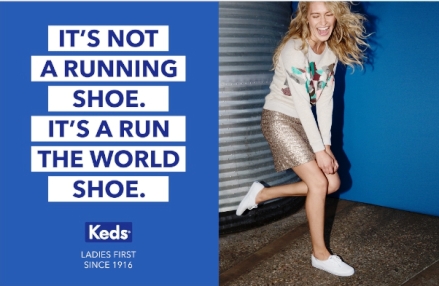 "A new generation of women has been leading an exciting cultural shift redefining the conversation about equality and female empowerment," said Chris Lindner, President, Keds. "Keds was originally created in 1916 to provide ladies with accessible, fashionable footwear to allow them to be who they wanted to be, and go where they wanted to go. Ladies First is a celebration of amazing women like Taylor Swift who are blazing new trails every day. From CEOing to BFFing, these ladies are doing it all. "

Created in partnership with kirshenbaum bond senecal + partners (KBS), Ladies First showcases the Keds Fall 2015 footwear collection with progressive messages that celebrate a new notion of what it means to be a lady in 2015. Insights from more than 10,000 women from eight countries helped to define the campaign and a universal global mindset on female empowerment. Themes of constant evolution, setting your own path, and not being defined by a specific style were key learnings. Headlines like all dressed up with everywhere to go and there will be moving, there will be shaking are front and center over street style photos for a one-two punch of fashion and emotion.

The campaign features backdrops commissioned from notable female artists demonstrating one example of what the campaign stands for, giving women a platform to express themselves. Illustrator Priscilla White, surface artist and pattern designer Kendra Dandy, and street artist Paige Smith, who rose to fame with her Urban Geodes street art series that can be seen in cities around the world from Los Angeles to Seoul, are a few of the ladies that were included.

"Everywhere you look today young women are taking charge of their personal narratives. We were inspired by this new generation of women who are demolishing anachronistic notions of feminisms, such as the idea that feminine style and career success are somehow mutually exclusive," said Jonah Bloom, Co-President NY, Co-Chief Strategy Officer, kbs+. "Promoting women isn't a new concept for Keds but the Ladies First campaign celebrates the future by inspiring the current generation of boundary breakers."

Campaign rollout includes a new media strategy that combines retail and social with curated print and digital partners like Nylon, Paper, Interview, Refinery29 and WhoWhatWear. High-impact disruptive elements like wild postings, bus wraps, and subway media will also be seen throughout fall in many of NYC's most artistic neighborhoods.

"Keds is approaching its centennial year in 2016, and the Ladies First platform is the start of a powerful new era," said Lindner. "The headline 'it's not a running shoe, it's a run the world shoe' is a pinnacle expression of what we stand for."

Please visit www.Keds.com to preview the Fall Collection and to learn more about the Ladies First Since 1916 global brand platform.

In 1916 Keds® redefined footwear with the introduction of the Champion sneaker. The iconic design ignited a style revolution, capturing the hearts of women everywhere from fashion icons to the girl next door. Today, as Keds® heads into its centennial year, the brand has become a lifestyle fueled by a passion to put ladies first who reject conforming to the old rules in favor of defining a new path that harnesses the duality of femininity and strength. Whether it's her love of fashion or killing it in her career, Keds supports what she's all about and who she aspires to be, championing what it means to be a lady today. For more information, please visit Keds.com. Keds® is a division of Wolverine Worldwide, the world's leading maker of casual, work, outdoor, athletic and children's footwear.