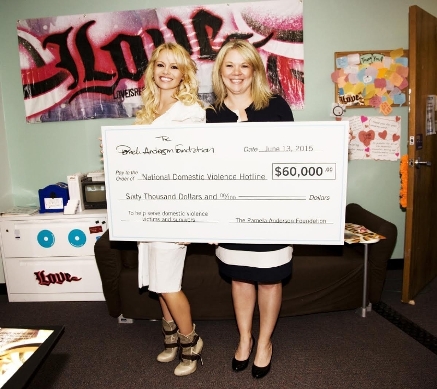 AUSTIN, Texas, June 18, 2015 /PRNewswire/ -- She is probably best known for her career as an actress, but Pamela Anderson now spends most of her time raising funds for non-profit organizations worldwide. Anderson recently visited the National Domestic Violence Hotline (The Hotline) to make a significant contribution and hear first-hand how advocates are making a difference in the lives of those affected by abuse.

Every day, advocates at The Hotline answer approximately 900 calls, chats and texts from victims, survivors, their friends and family seeking information about domestic violence. With one in four women, one in seven men and one in three teens experiencing physical, emotional or verbal abuse by an intimate partner in their lifetime, the need to provide resources and support for victims is critical. It is why The Pamela Anderson Foundation chose to donate $60,000 to the organization that has been answering calls around the clock since its inception in 1996.

"It was incredibly important for me to meet the men and women who, day in and day out, offer compassion and information to anyone who needs help with domestic violence. I am so happy to know that our donation will help ensure those seeking options will continue to find that trusted resource at The Hotline," said Pamela Anderson, founder of The Pamela Anderson Foundation.

Anderson presented the check to Katie Ray-Jones, chief executive officer of The Hotline, who thanked the actress, author and philanthropist for her generous gift. "We know that Pamela is incredibly busy raising money to support her foundation, allowing her to donate to causes she believes in such as ours. We couldn't do this work without supporters like The Pamela Anderson Foundation. We are grateful for people like her who have a place in their heart for the people we serve."

Approximately 1.3 million women and 835,000 men are physically assaulted by an intimate partner annually in the United States.
$5.8 billion each year is the cost of intimate partner rape, sexual assault and stalking. $4.1 billion of that is for direct medical and mental healthcare.
Nearly 8 million days of unpaid work are lost each year due to domestic violence issues – the equivalent of 32,000 full time jobs.

About the National Domestic Violence Hotline

The National Domestic Violence Hotline is a non-profit organization established in 1996 as a component of the Violence Against Women Act (VAWA). Operating around the clock, confidential and free of cost, The Hotline provides victims and survivors with life-saving tools and immediate support. Callers to the hotline 1-800-799-SAFE (7233) can expect highly trained advocates to offer compassionate support, crisis intervention information and referral services in more than 200 languages. Visitors to TheHotline.org can find information about domestic violence, safety planning, local resources, and ways to support the organization.

The Hotline relies on the generous support of individuals, private gifts from corporations and foundations and federal grants. It is funded in part by Grant Number 90EV0407/03 from the U.S. Department of Health and Human Services (HHS) Family Violence Prevention and Services Program, a division of the Family and Youth Services Bureau in the Administration for Children and Families. Its contents are solely the responsibility of the authors and do not necessarily represent the official views of the Administration for Children and Families or the U.S. Department of HHS.